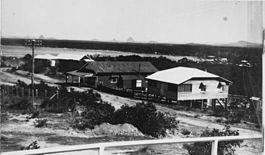 The size of Caloundra is approximately 3 km².  It has 8 parks covering nearly 32% of the total area.

Caloundra is the southernmost community on the Sunshine Coast in South East Queensland, Australia, located 90 kilometres north of Brisbane CBD.

This region is bounded roughly by Currimundi Creek, Rainforest Drive and the Mooloolah River to the north, Beerwah State Forest and Bruce Highway to the west, the Pumicestone Passage (separating the area from Bribie Island) and the ocean to the east, and Bells Creek to the south. The central business district (CBD) for the area is located on Bulcock Street, Caloundra.

In 1875, Roberts Bulcock, an English immigrant who founded a Brisbane newspaper and later represented the Brisbane suburb of Enoggera in the Legislative Assembly of Queensland from 1885 until 1888, bought 277 acres (1.12 km2) of land in the region.  A town was surveyed in the 1870s, and land sales commenced in 1883. With its proximity to beaches, the area became popular with tourists and a number of hotels and guest houses were set up to accommodate them.

In 1917, Bulcock's son, Robert Bulcock Jr, who was a councillor in the Shire of Landsborough, subdivided part of the land into 404 lots. This area became known as Bulcock Beach.  By 1933, Caloundra had a population of 271.

During World War II, the area became key to Australian defence due to defensive positions along the beaches. Radar stations and machine gun pits were mounted, and Australian and US armed forces came to the area. From the early 1950s onwards, Caloundra experienced a boom in development and population, and by 1968, it had come to dominate the Shire of Landsborough so completely that the council chambers were relocated to Caloundra.